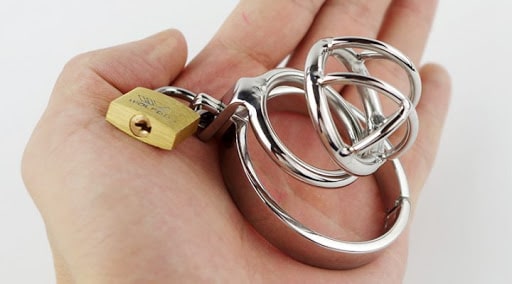 Penis Cages and Male Chastity from the Psychological Point of View

The chastity lifestyle is a common fantasy in men, but where does it come from? Everything begins with the idea of control. Male chastity is all about transferring male sexuality into the hands of someone else (in this case, literally.)

The penis is the most masculine part of every man’s body; so why lock it up? Many people connect the chastity cage with trust, infidelity, and similar relationship concerns. However, that’s not the real reason why some men choose to lock themselves up.

In most cases, men choose chastity belts by themselves because they find them arousing. Basically, this arousing activity, i.e. wearing a belt, actually limits the arousal itself, as limitations on the performance and use of their genitals is what excites men.

This is a taboo topic because men don’t want to let others know that they don’t have control over their genitals. It’s all about appearances; if nobody knows about it, a caged man can keep acting in a masculine manner.

When a male is in a chastity device, his orgasms are controlled by someone else. What’s more, he will have this pure sexual energy which he won’t be able to channel as usual. He knows that he can’t touch his genitals even if he wanted to – and once in the cage, he will want to touch them more than ever.

That’s the thing about sexuality and sex; it isn’t just about the physical aspect. Many people enjoy other aspects as well; a mental component is very important. Sexual energy emerges from the mental component; when a man can’t achieve sexual satisfaction, then that energy can be used for a number of productive things.

The Science Behind Male Chastity

One theory behind male chastity says that men are constantly thinking about their next orgasm. That sounds logical, simple, and even primal. However, it doesn’t apply to all men. When men find themselves with sexual energy they cannot command, they have to put it to other uses. So, many claim that their concentration has improved, as well as their performance at both work and home. This relates to the level of hormones that are present in the body in a state or arousal and during ejaculation.

Men find it important to believe that their device is impenetrable. However, that is genuinely hard. Every man’s genitalia has a different shape, size, position, etc. Mass-produced chastity devices simply cannot fit everyone perfectly. In addition, the penis is a very flexible muscle which can take numerous positions. If he wanted to, every man could somehow escape the belt.

So, what is the chastity play really about? The experience is, in fact, shared by both parties (the one who wears it and the keyholder.) Also, both have to give their consent. Men could wear chastities in order to please and serve their keyholders. Also, some men like the idea of being dominated.

Men in chastity have no control over their penises and orgasms. If they wear the belt long enough, their bodies will stabilize and a number of benefits will present themselves. There has to be a substantial amount of trust and honesty between both parties; without that, the chastity thing probably won’t work out.

So, if you are in for the long run, instead of searching for an inescapable cage, find a comfortable one.