You might not have considered it, but have you ever thought about how your sex life affects your mood? On some careful research and thinking about your own behavior, you might come to conclusion and discover a relationship between sex and mood. Indeed, upon some in depth research we have concluded that the relationship between one’s mood, and sexual activity and orgasm are not considered to be the greatest of mysteries. Indeed, there is a well-researched scientific basis on understanding the biochemical mechanisms that occur before, during and after sexual gratification. In this article, we will explore the relationship between the brain, sexual release, and the science behind male chastity. This in turn, may help you answer some of the questions that you might have had which concerned male chastity, or they might lead to a flurry of research whereby you can explore male chastity in new and profound ways. As we have mentioned elsewhere, to reduce male chastity to the denial of orgasms is simplistic and doesn’t accurately reflect male chastity as a whole.

The brain is a complex organ and we understand that it is driven by a number of varying neurotransmitters which we can hold accountable for changing our moods throughout the day, and indeed over the course of our lives. But there are only a couple of these neurotransmitters which are also involved with sexual activity; these three being dopamine, prolactin and oxytocin. Men and women can be said to have distinctly different patterns and responses to these neurotransmitters and the argument behind that is that it centres on our ability, needs and desires to procreate as well as to raise our off-spring so that they too can survive long enough to procreate. Why don’t some people feel this need or urge? Well that relates to the fourth factor which is the concentration of receptors for those neurotransmitters and this in particular relates to how the human body handles dopamine. Let’s break down these three neurotransmitters and how they affect our body, and our responses to sexual activity before we move on to how that relates to male chastity.

Dopamine is commonly associated with the brains reward and pleasure centers. It can cause feelings of pleasure if we partake in certain activities, such as sexual activity, the consumption of calorie rich foods, the ingestion of drugs, or other behaviors such as shopping and gambling. Dopamine is often referred to as the addictive hormone – people with low dopamine levels have been shown to have higher risks of suffering from addictions. Surprisingly, it is dopamine which is also partially responsible for Parkinson’s disease which sees people with a dopamine deficiency potentially developing the illness. The intense pleasure that we obtain from orgasms is as a result of dopamine flooding our reward centers in our brain during sexual activity.

Normal/Elevated Dopamine Levels: Normal levels of dopamine can result in motivation, contentment, an ability to gather pleasure from finishing tasks, optimism, kindness and good natured feelings towards others and bond with them as well as a healthy libido.

Low Dopamine Levels: Lower levels of dopamine can result in depression and an inability to function within the world due to a lack of ambition and drive, it can also result in an inability to feel certain emotions such as love, and often manifests itself into impaired judgement, lack of remorse and social anxiety. Low dopamine levels also adversely affect the libido.

Prolactin is an interesting neurotransmitter and it is named after its ability to affect lactation levels in women. This neurotransmitter has over 300 uses within the body, but it’s effects on the orgasm are well researched in comparison to other uses. An orgasm, through either physical sex or masturbation, will result in a large amount of prolactin being released into the body. It is this chemical which results in a better mood following sexual activity, and can last for over an hour. Prolactin and Dopamine rely on each other for context and control when it comes to sexual activity. Prolactin in men directly affects the refractory period before they can maintain an erection and engage in sexual activities again. The older that you get, the more prolactin is produced in men. Males with a deficiency in prolactin are often able to engage in sexual activity multiple times within a very short amount of time, or they will not lose their erection after climaxing.

Excess levels of prolactin are commonly associated with irritability, decreased testosterone, and a substantial loss of libido.

Often call the love drug – oxytocin is responsible for the feelings of trust, connectedness, closeness and protection. A burst of oxytocin is produced during orgasm and it is often attributed to the afterglow that we feel post sexual activity. Oxytocin is released during all forms of intimate activity, which includes touching, hugging and caressing. After orgasm, in men, the levels of oxytocin quickly plummet until they are below where they were before sexual activity, whereas in women it will lower itself much more slowly, often remaining higher than it was initially. The reasons for this remain largely unclear, though speculation exists that it is linked to ideas of empathy and is a necessary part of bonding, child birth, and child rearing, this also means that post orgasm that women are far more likely to let their guard down and fall in love.

Normal/Elevated levels of Oxytocin:-
This is the love drug after all and as such elevated levels will result in strong and powerful feelings of emotion, a sense of devotion and closeness, an increased sense of positivist, and feelings or protection and responsibility.

Low Oxytocin Levels:-
Sees a reduction of feelings of attachment and connection, it is also responsible for low libido and depression, as well as a reduction of empathy towards others.

How Does This Affect A Man In Chastity? 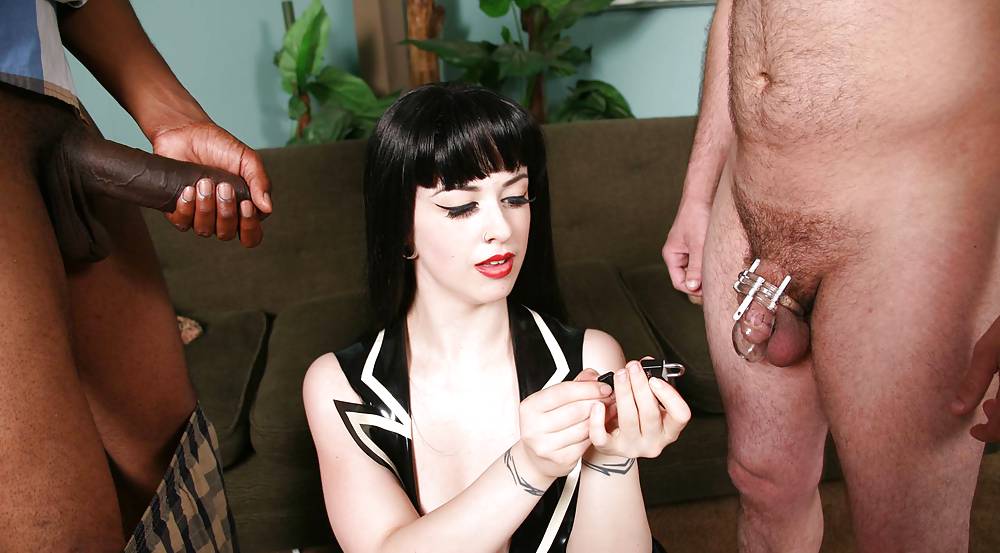 We just spoke about how an orgasm results in a substantial drop after an orgasm in a male, with the females drop occurring more slowly in the sense of a plateauing effect. What if we were to avoid this sudden drop by removing it all together? In detailed blogposts by Sarah Jameson on her website male chastity blog, she details how after each orgasm there would be a period of time where her partner, John, would not be as engaging in the sense of serving and helping, as he was before his orgasm. She timed this sensation to last for a period of between 7-10 days and she has used this tracking to expand the periods as to which he remains caged. If we switch John to engaging in sexual activity once or twice per week, which could be considered to be normal, then the levels of the neurotransmitters which we have just discussed would never really stabilize and as such it would be a continual roller coaster ride of emotions.

The most important thing to consider here would be the constant fluctuation of oxytocin levels which are responsible for John’s moods, and his ability to engage in intimate activities with his wife through touching, caressing and other variations of this. For an individual who engages in chastity, or in the case of John has multiple orgasms on a honeymoon like weekend every few months, then he will still experience the immediate downward spiral as a result of the neurotransmitters and his mood will still change as a result of having low dopamine levels and higher prolactin levels.

Unlike his peers though, who will continually have orgasms within the dopamine recovery period, John does not and therefore will not suffer from the fluctuation of the neurotransmitters in the same way as his peers. Indeed, within the fortnight his dopamine levels will have returned to a state of relative normalcy and will continually increase over time through frequent sexual play and through intimacy with his partner whereby he does not get sexual release. One could even argue that a male in a chastity device will have increased levels of dopamine in his system, due to the presence of the chastity cage which he finds arousing.

There are a few theories which suggest that this fluctuation in males is as a result of the need to procreate; that being to get his sexual partner pregnant and then disengage from sexual activity leaving her in a flat lined state of emotions that specialize in empathy and caring and ‘motherly’ natures, that she can use to then deal with pregnancy, child birth, and ultimately child-rearing. This mechanism is cyclic in the sense for a male and probably can be related to gene survival; it would be beneficial for a male to engage in a quantity and variety of sex to ensure it is his genes which are being reproduced across the spectrum and combining them with different women to ensure a mix of children within a short period of time.

Modern medicine has grown our life expectancy to around 80 years, vastly different in comparison to the early 19th century where the average life expectancy was considered to be around 30 years. Indeed, studies suggest that since 1900, the average life expectancy has doubled. Could we then attribute that to the suggestion humans may or may not be geared for monogamous lives as our life expectancy has almost tripled in such a short space of time? We could probably make that argument, especially considering reports that couples in relationships of chastity experience substantially lower rates of divorce and separation than their non-chastity counterparts. Certainly, an interesting thing to consider.